Brief
Develop an app for the Metropolitan Museum of Art (Met) that would enrich the in-museum experience of users while catering to the varied needs of different users.

Problems
- Lack of interactivity between the user, content and the works of art
- Lack of customization
- Length of audio
- Language barrier
- Lack of accessibility

Goals
Create an Art History app for the Met Museum that improves the quality of interaction between the user and the information. Since current apps or devices lack the ability to morph depending on the user’s need, my goal is to give users an engaging and customizable experience. 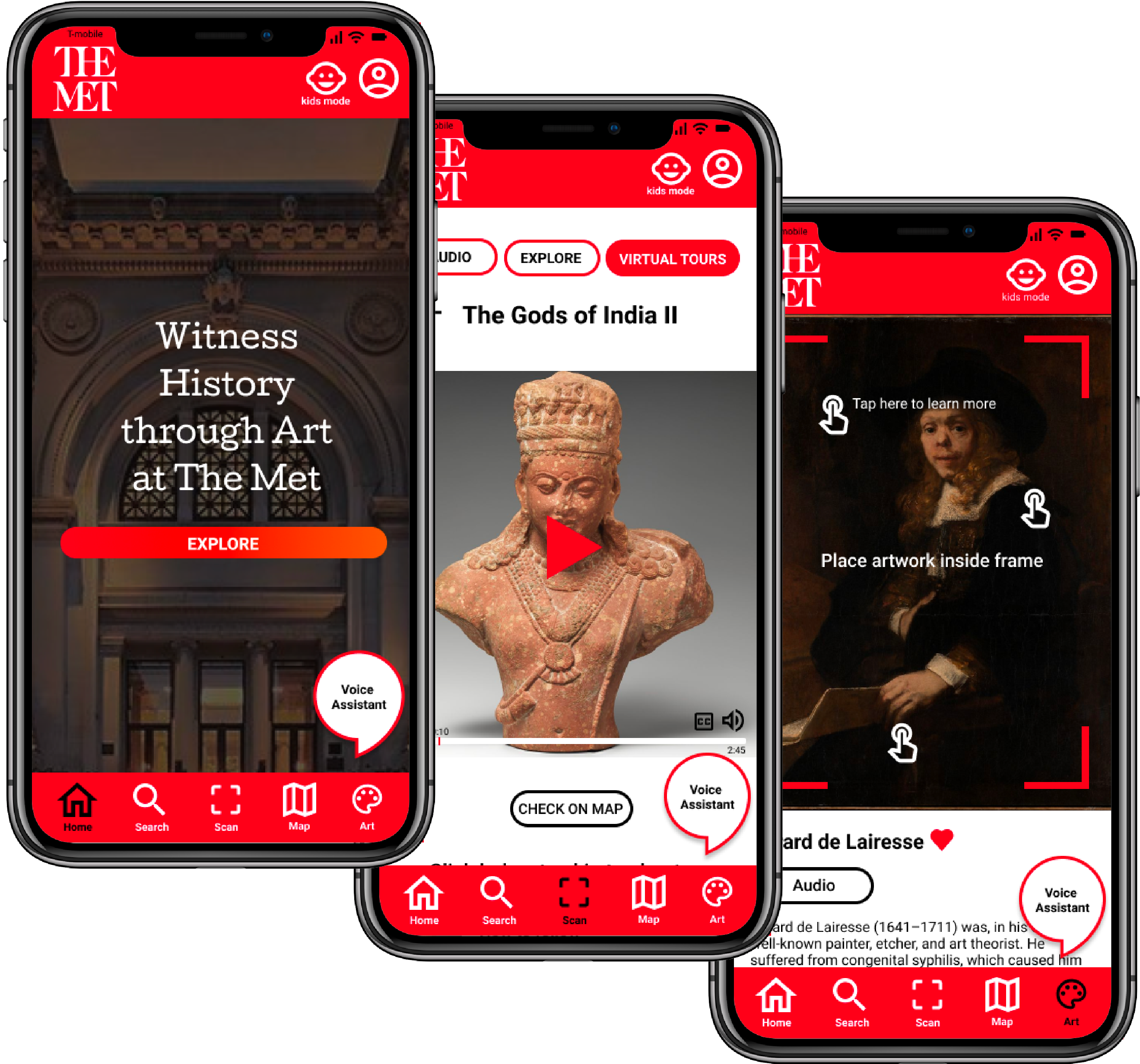 What are we talking about?

The Metropolitan Museum of Art or better known as the Met is the largest museum in the Western Hemisphere and houses close to two million works of art from around the globe and across civilisations. It is also the 4th most visited museum in the world and is frequented not only by locals who have a taste for art but also students and tourists from all over the world. But understanding and enjoying art isn’t that easy. With visits from international as well as local students and tourists, the Met requires a versatile and rich tool to communicate all the research that is required to see a painting as the artist intended. Currently the museum uses its website as a platform for its audio guide and other information and also provides a physical audio guide machine for a fee.

I am also a patron of this museum spending countless hours at the museum for my assignments so when the opportunity came to develop an app, I knew I wanted to start with this one. A museum with so much important work should be accompanied by a dedicated app that guides and informs the user while adapting to their needs

How did I go about this?

To start building something, we need to address the users’ pain points. So the first step was to hear issues from the horse's mouth aka visitors of the Met Museum website and art enthusiasts.
My user research included phone interviews barring one which was an in person interview. Participants included 2 males, 2 females and a child. 1 participant was older than 50 years and the child was younger than 10 while the rest were between 20 - 45 years old. I tried to include people from different age groups who have the opportunity to visit art galleries. Some of them did it occasionally while others went more often. Most people used audio guide equipment, online info or tour guides to learn about the works in a museum.

Since I am also an avid museum goer I had some assumptions before I went into the interviews. I chose to write them down, set them aside and forget about them until after my user research.

One of my assumptions was the need for something more visual and interactive. This was proven correct by all the interviewees I spoke to. I was also surprised by the number of people who did not like the length of the audio. I have faced this at times when I have reached a museum a few hours before closing but I never saw it as a problem.

An empathy map helps to organise the participants journeys and comments in a way to better understand their pain points and thoughts.

Key quotes directly from the participants:

What bothered the User?

“It is tough to spend more than an hour away from my daughter and work, while improving my skill and taking some time o but I want to prove that single parents can have it all.”

Sana was born in India and moved to New York 10 years ago to complete her fashion education. Currently they live in Brooklyn with their curious 6-year-old daughter. Sana juggles their time working as an Associate Costume designer for their local theatre and spending time with their daughter. Over the weekends once a month they like visiting art galleries. But since they have limited time, they find waiting in line for renting and returning audio devices very wasteful. They also don’t enjoy how the length of the audio content on the device hinders them from covering enough ground in the museum. Sometimes they just want to see a few pieces for their work but they find navigating to them difficult due to the lack of direction. They have thought of bringing their daughter along with them but are afraid the information on the placard as well as audio device is too complicated for them to understand.

“I am so excited for this new chapter in my life. However, my biggest fear is not being able to communicate or getting lost.”

Xin is a 60-year-old retired Chief Financial Officer who was born and worked in Beijing, China. After retirement, their dream is to travel to all the countries and explore different cultures. They especially enjoy collecting art and handicrafts. However, language is a huge barrier for them and they end up not understanding or trusting the guides as well as the information they encounter in tourist destinations. They have also tried using apps but find them too complicated or they find the text too small to read. Owing to their age and the ongoing pandemic they are especially concerned about their safety and hygiene of the devices used in the museums.

To get a high level understanding of their journey I used storyboarding. 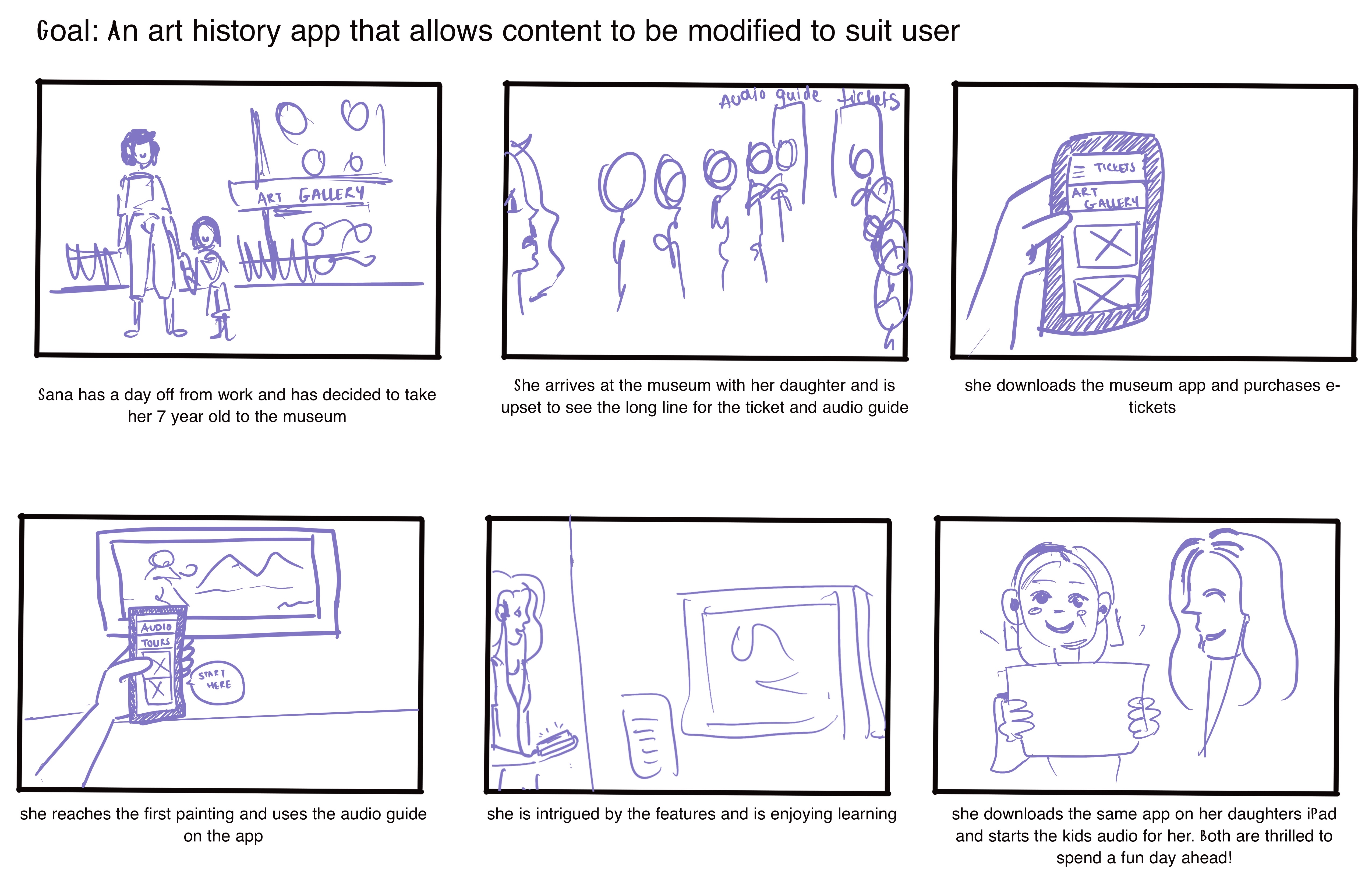 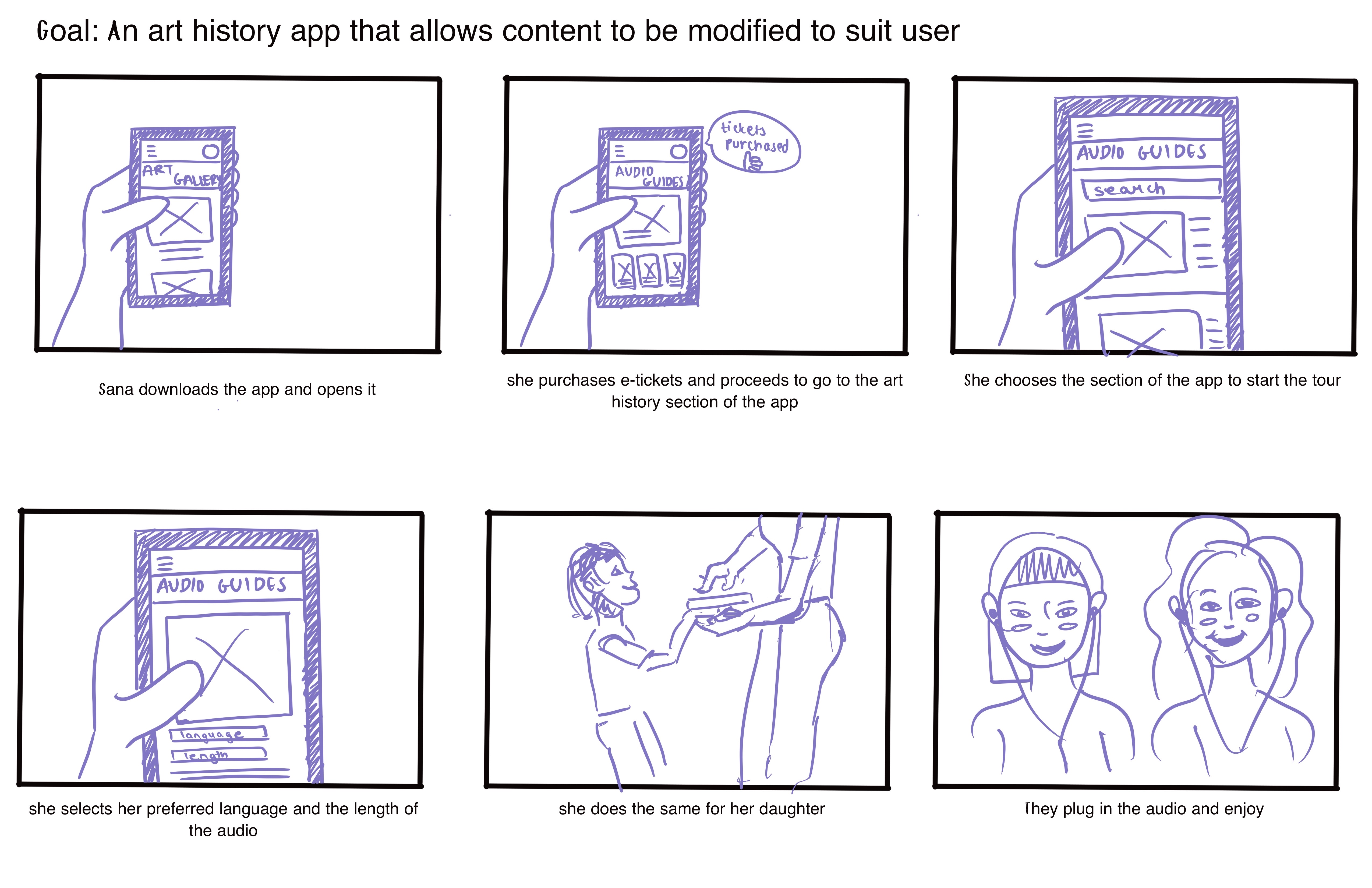 I then went on to map my personas journey from the time they entered the museum to when they exited. Even though the personas and their journeys are fictional, they are based on real users. The journeys were envisioned across 4 categories - action, task list, feeling adjective and improvement opportunities.

Next stop was ideating and creating wireframes. I started designing by sketching wireframes using ‘crazy eights’. This method involves sketching eight ideas in eight minutes.  This approach helped me iterate and create the best version before solidifying any design.

I wanted to add features that create a communication between the user and the artwork. This communication would be with the painting and as the user walks around the gallery. 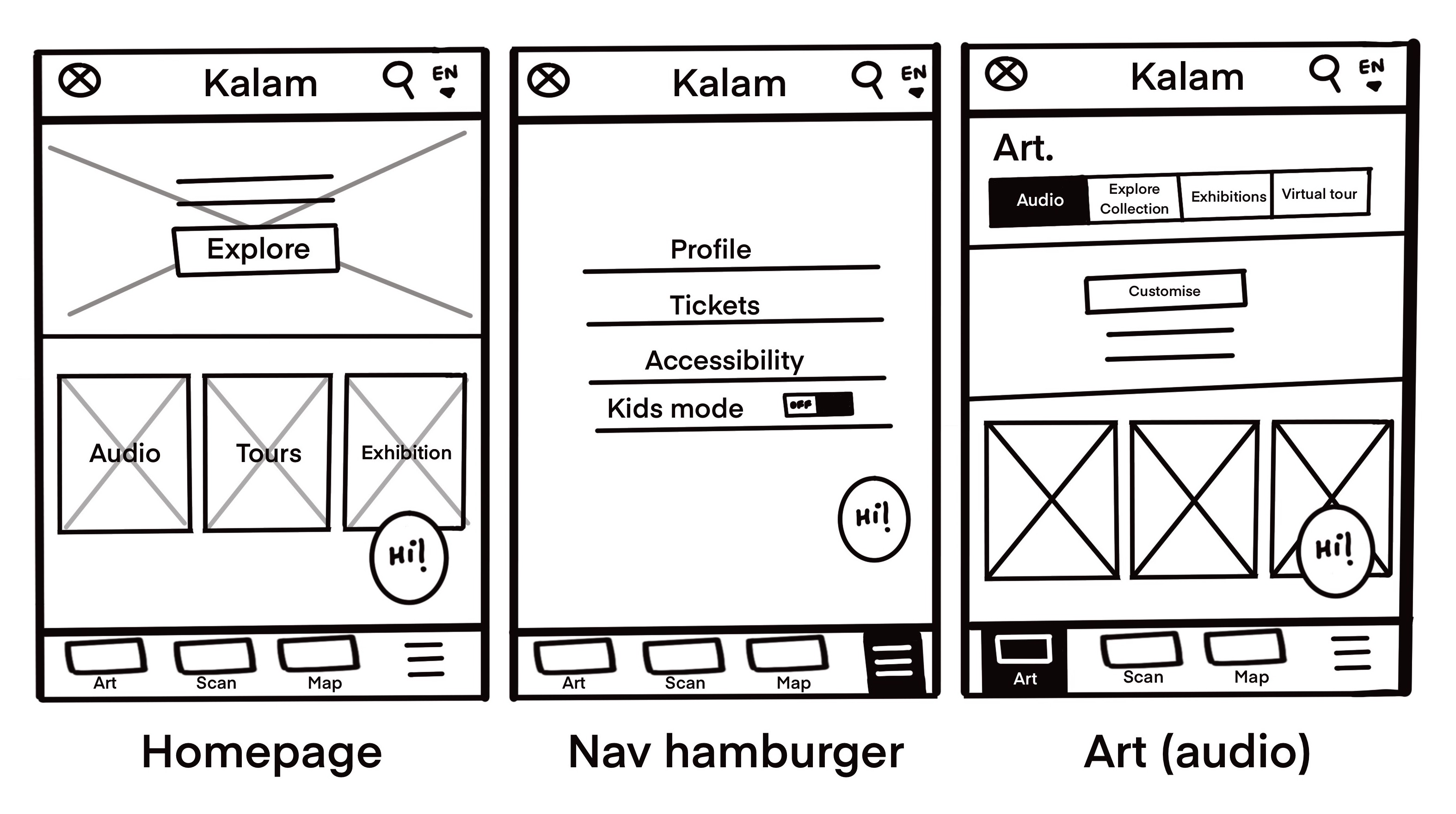 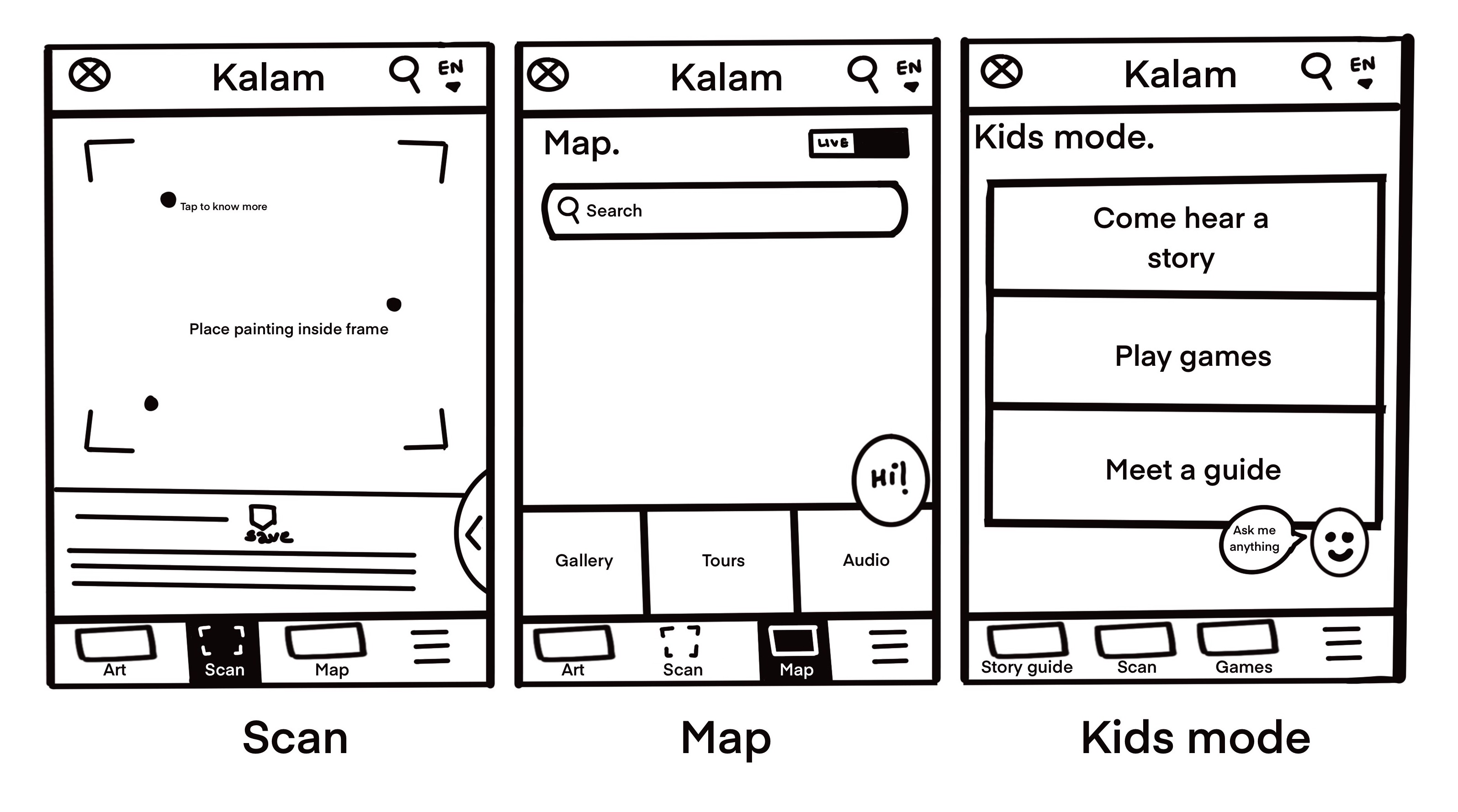 I used Figma to translate my paper wireframes to digital and then to low fidelity prototype. Below are some key features: 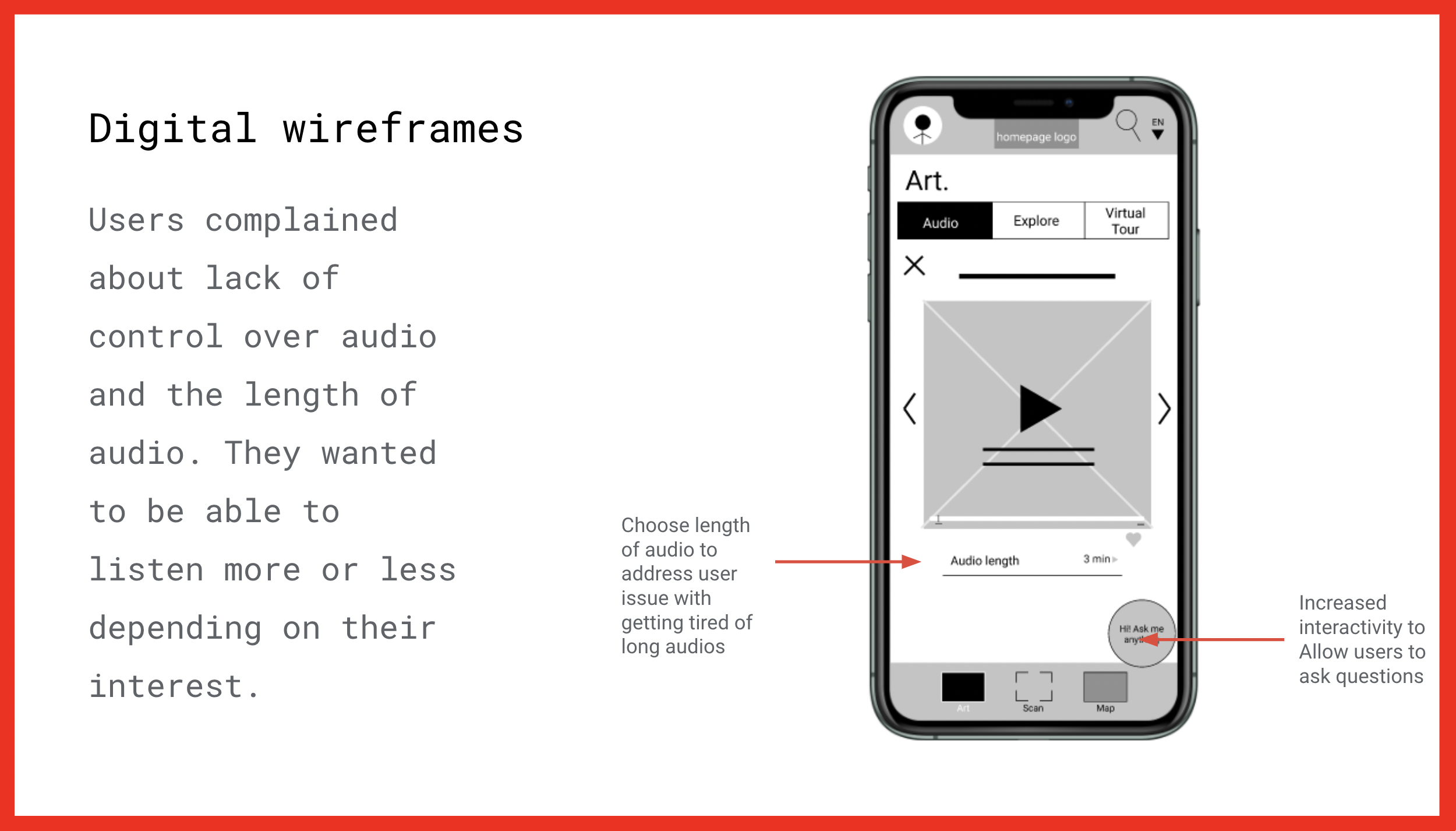 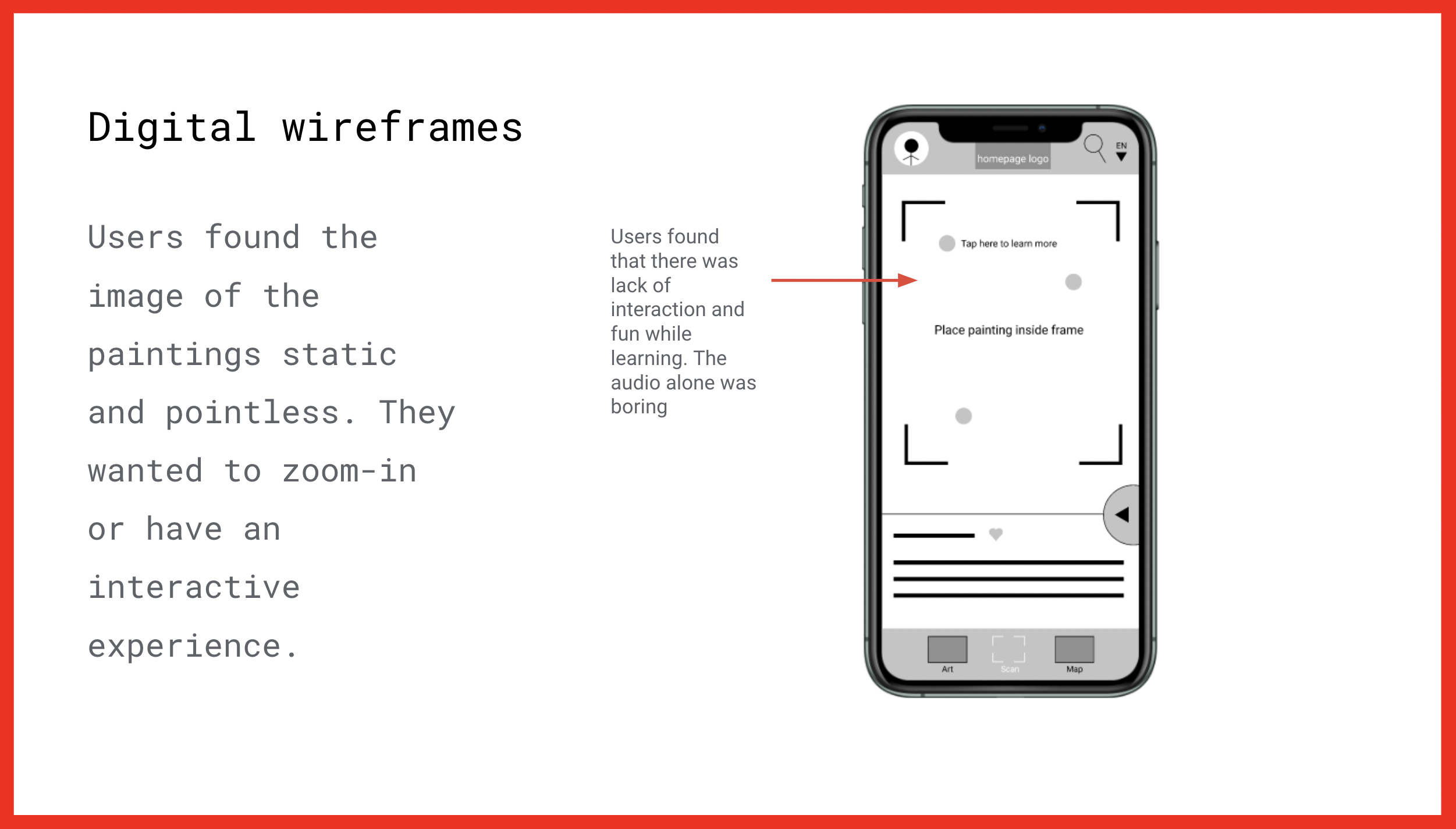 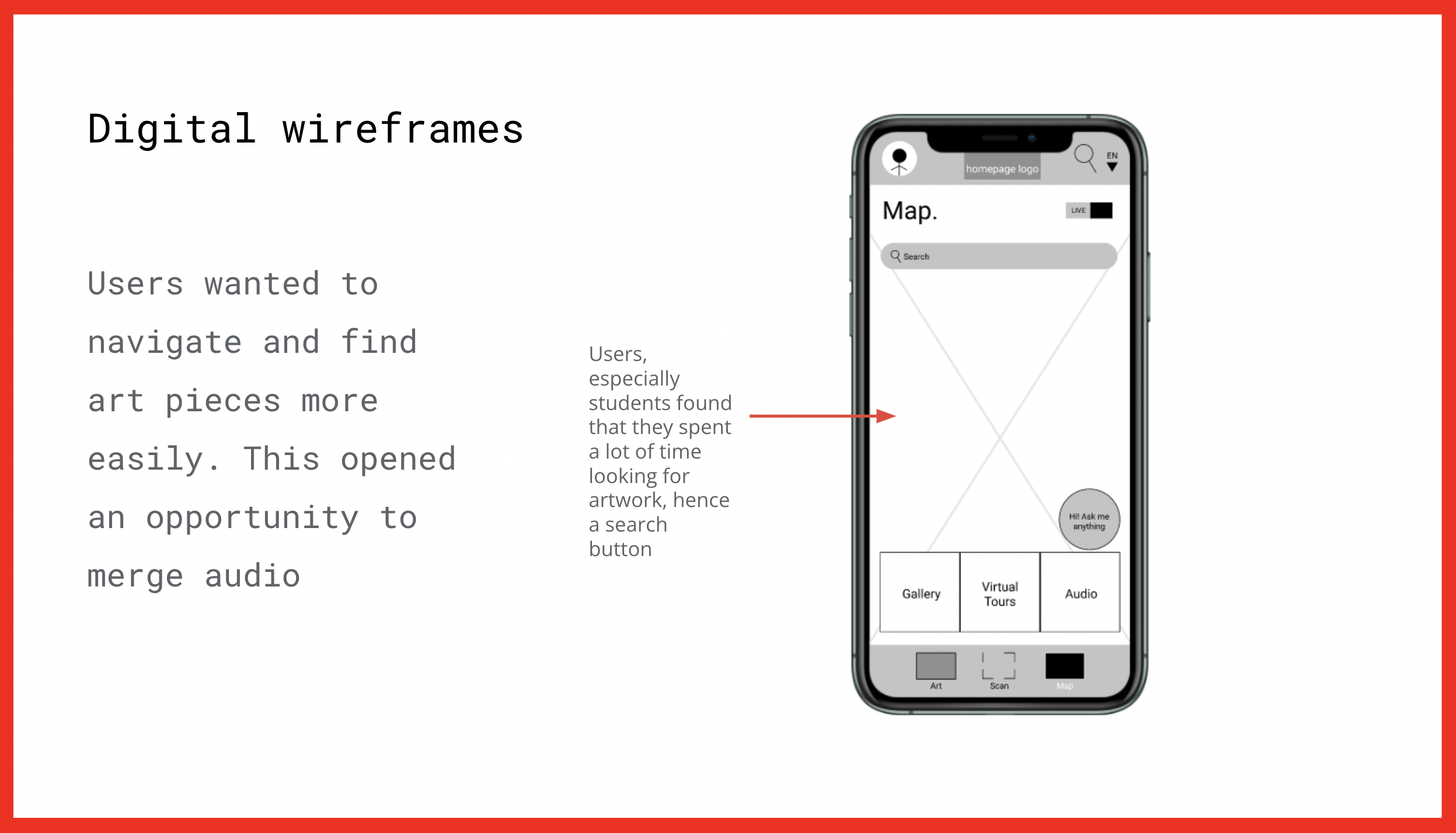 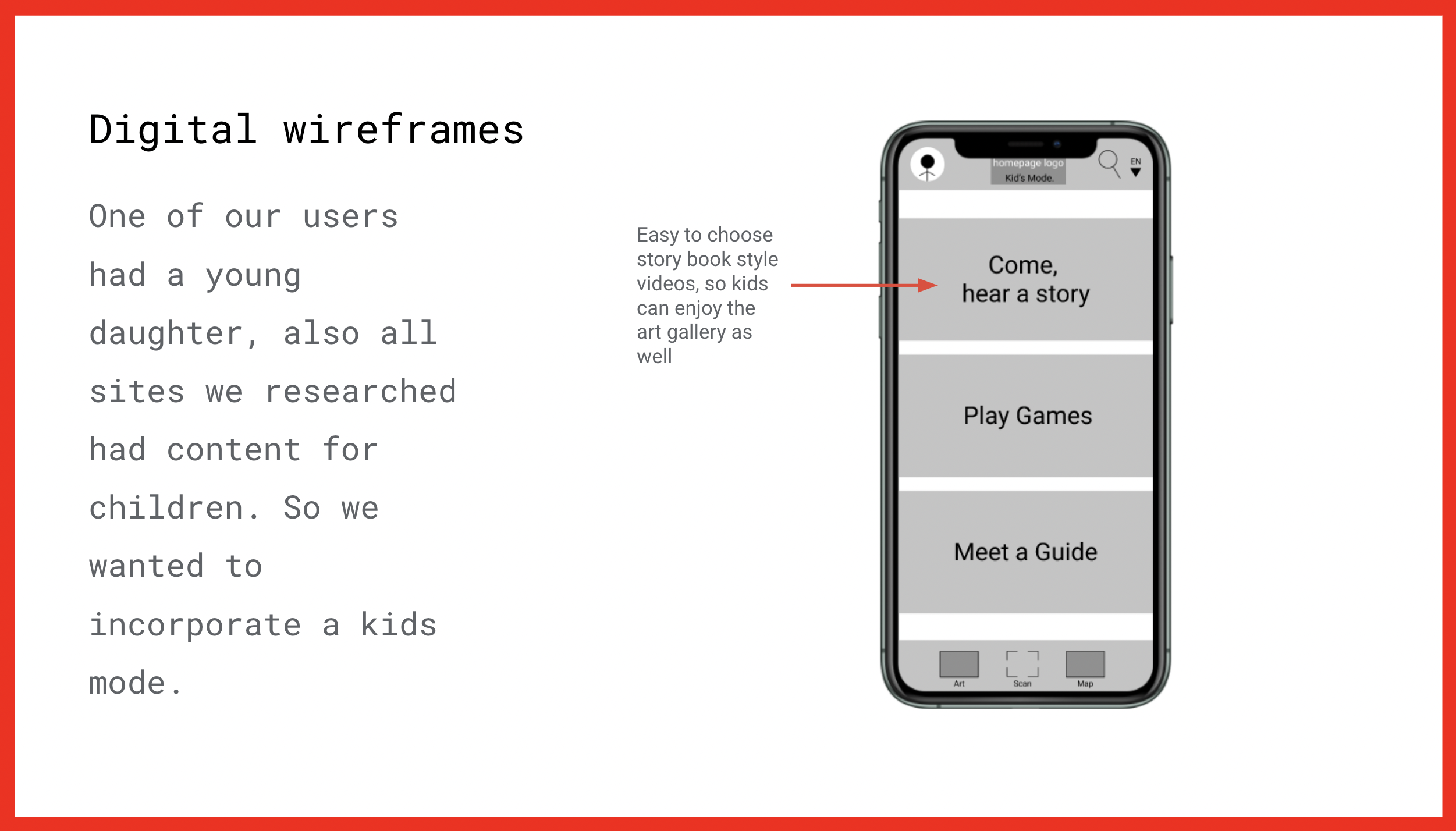 Now it was time to conduct another round of interviews to test whether these designs were user friendly and addressing the pain points.

I conducted one round of usability studies to test the low-fi prototype involving an unmoderated test on 5 participants from different demographics to get a full understanding of potential issues.

Based on the research these conclusions were drawn:

Taking into consideration the feedback on the low fidelity prototype, I created the mock ups for the app. I wanted to make sure that the colors and the aesthetic matched the brand identity of the Met so I stuck to white, black and red as my app colors

Then, I conducted a second usability test after the hi-fidelity prototype was completed to further refine the design and addressed the following issues: 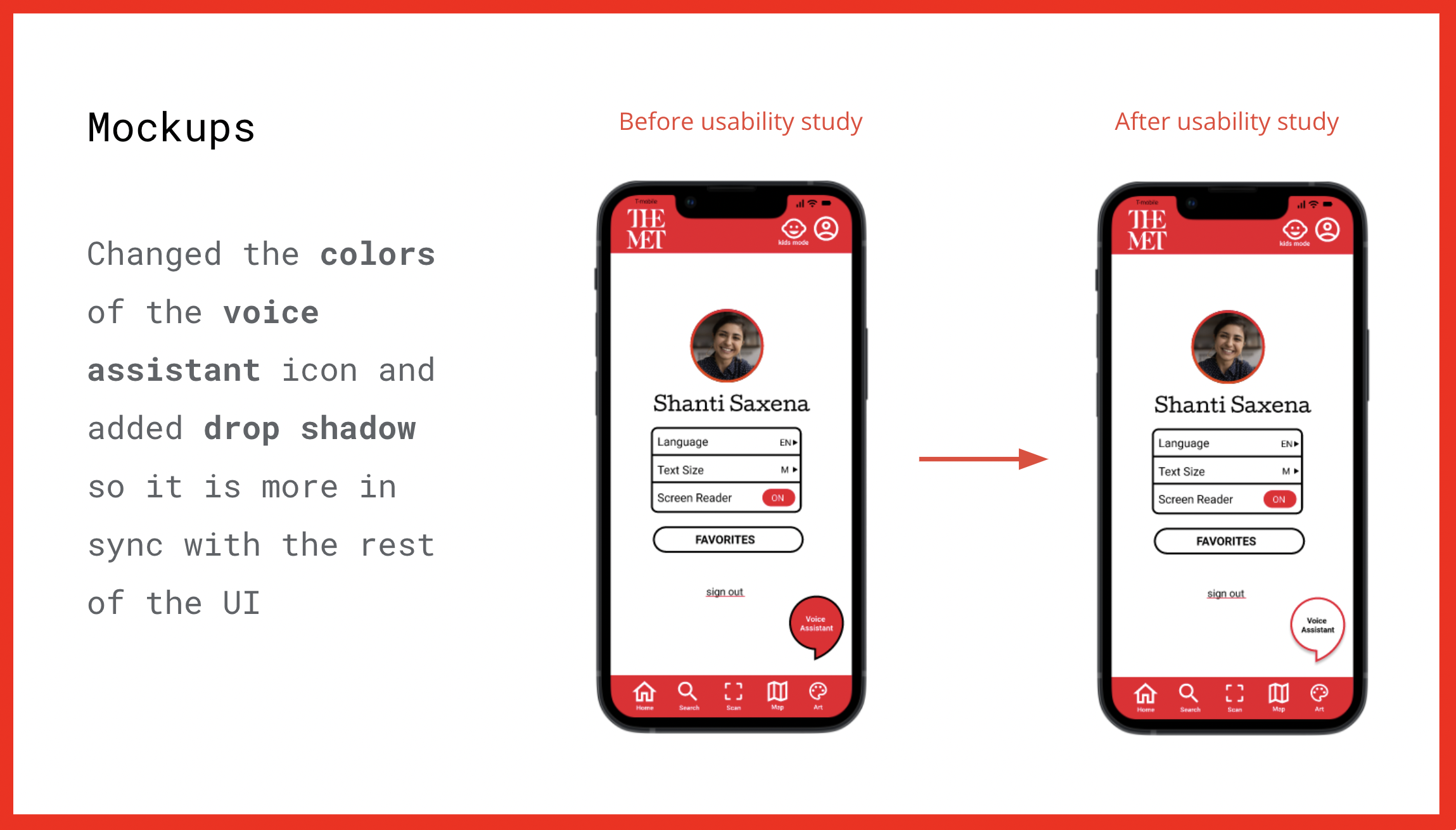 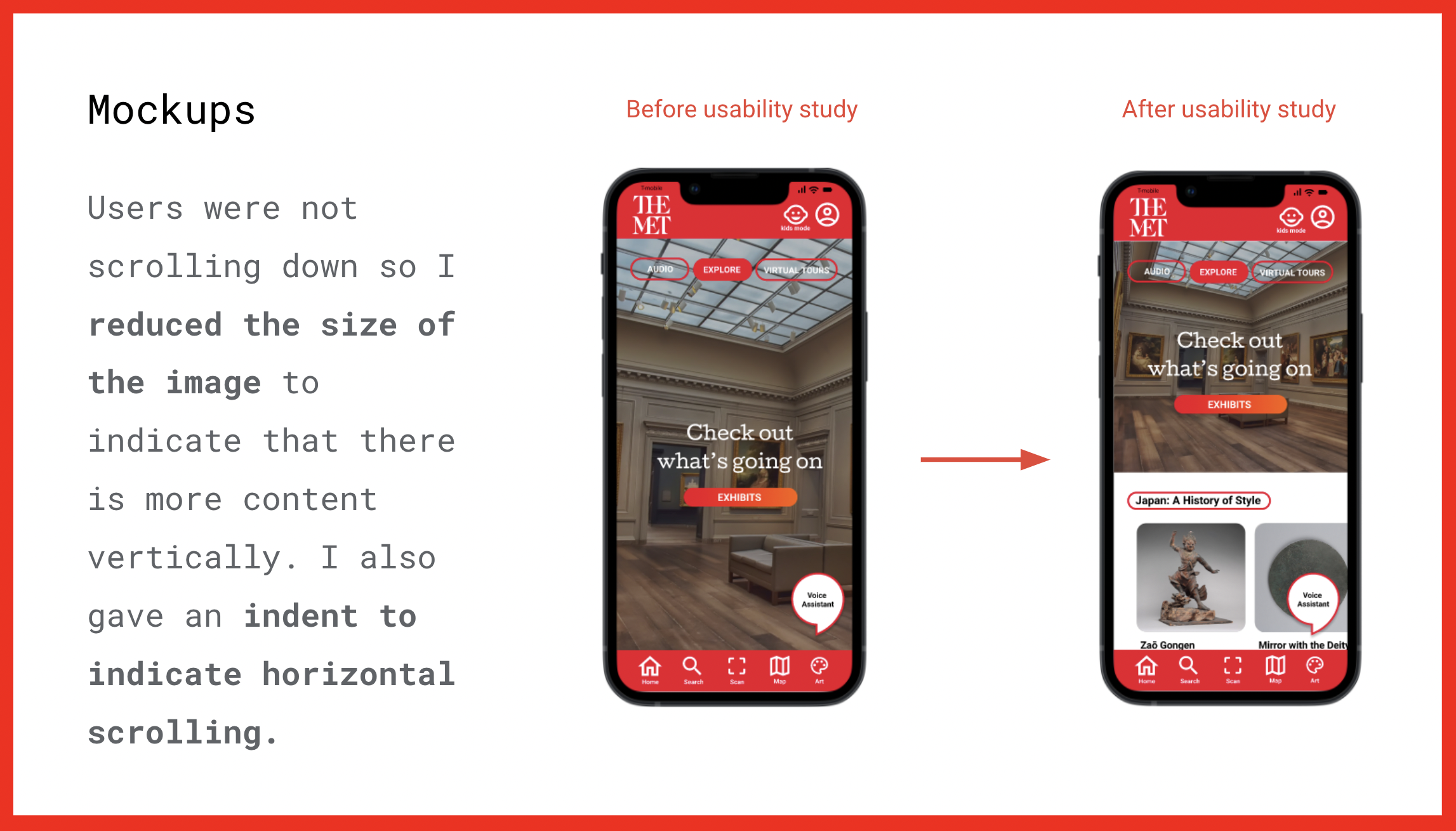 The final mock ups show an easy to navigate user flow and address all issues that users had with the previous iterations.

Check out the high-fidelity prototype

The app makes it accessible and fun to learn about the artwork while at the museum as well as outside. One user commented, “I love that I can scan the paintings and quickly get key points on it”

I learned that usability tests and research make designs and ideas so much richer. It also helps in building confidence and deciding when the app is ready to launch.